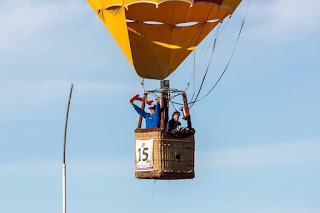 Gun pilots will be jockeying for position to snatch a prize worth approximately $6,500 officially announced for the Kavanagh Balloon Grab at the Canowindra Balloon Challenge this year.

One of the Most Spectacular Events

The major piece of ballooning equipment will be up for grabs in what is arguably one of the most spectacular events in the program line-up which will run from April 18th to 25th.

In the competition, balloons launch from a site of their choosing (at a minimum distance away) as declared by the flight director according to wind conditions on the day.

The aim is to fly in and try to pluck a large key from the top of a flagpole. The key represents the major prize for the first one to get it.

Not to Be Missed

Spectators gather outside a safety exclusion zone around the flagpole to watch the fleet approach and cheer the pilots on. This is not part of the weekly point score but is a separate ‘not to be missed’ event.
Posted by Unknown at 10:30